"If you do no understand white supremacy - what it is, and how it works, everything else that you understand will only confuse you."

“...there was Dagon, fallen on his face on the ground before the ark of the LORD!”

"Fallen, fallen is Babylon the great!"

The photo below is from Monday December 21, 2020 published in the Washington Post and taken by Jack Mayer for Reuters.  It shows the removal of the Robert E. Lee statue from the Capitol rotunda in Washington, DC.  Lee was commander of the Confederate army during the US Civil War. 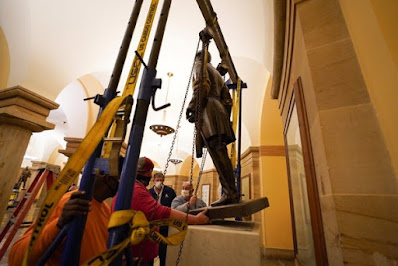 This blog post is an example of ethnic marketing for the good.

In the aftermath of watching Mr. George Floyd die on video in Minnesota in 2020 there was a global outcry and eruption to end racism, Nazism, white supremacy, all forms of colonization, and the murder and incarcerations of people identified as 'black' or 'non-white' by those who identify as 'white.'

This outcry included the legal and forced removal of monuments and statues of slaveowners, colonizers, white supremacists and Confederates. This happened both in the United States of America, and around the world.

One particular statue removal that caught my attention was the statue of Robert E. Lee in the rotunda of the Capitol.   Lee was a Virginian, and a West Point graduate, who sided with and became the commander of the army of the Confederate States of America at the start of the Civil War.

The rebels attacked the USA in 1861 to start that war, and in 1865 Lee's surrender convinced the other Confederates to surrender.  What followed from that time until now is the work of the Lost Cause doctrine---a rewriting of our past.

The Capitol building, or Capitol Hill, is where America's lawmakers meet to debate and agree.  Lee's statue was placed in the rotunda to honor Virginia heroes.  Many saw this as a disgrace to what happened in the past and that he did not deserve this honor and worked to have it removed.  The statue removal was also supported in a letter written in 2020 to Virginia Governor Northam by United States representatives Jennifer Wexton and Donald McEachin.

What they wrote is what most people may or may not have known:  "These statutes aimed to rewrite Lee’s reputation from that of a cruel slave owner and Confederate General to portraying him as a kind man and reluctant war hero who selflessly served his home state of Virginia..."

Now, when they write "these statues" they are referring to the numerous statues placed around the United States since the early 1900s honoring Confederates who in fact surrendered and lost the Civil War.  This campaign is part of what is known as the Lost Cause.

What you should know is that after the Civil War, organizers began to re-write the history and therefore place a new memory in the nation.  A short film that explains that is HERE.  A recent book to read that also shows proof of this is HERE.  This new memory included new stereotypes of African Americans from happy to be enslaved to becoming evil, cruel, thieves, rapists and the like.  This was initiated in the film "Birth of a Nation," released in 1915, the film was originally called "The Clansman."

Historically the Confederates committed treason but unlike others who commit treason they were allowed to go home.  Many, if not all, were exempt from prison, execution or exile.

What is my connection between the Lost Cause, and the recent removal of these statues, and ethnic marketing?

My connection is tourism!

I have produced tours in the Shaw community that surrounds Howard University that is meant to be positive and psychologically healing.  These tours are for all people, all ages, and especially for people of African descent whose ancestors were displaced by the TransAtlantic Slave Trade.  Since that time people of African descent have also been the victims of an information campaign to erase how they freed themselves from bondage.

The center of my tours is also a memorial statue, the African American Civil War Memorial and the museum of the same name.

The memorial honors the memory of United States Colored Troops (USCT).  The memorial is located at 10th and U Street exit of the U Street Metro, the Green and Yellow lines, in Washington, DC.

When the USCT joined the Civil War they turned the tide of the war.  In the words of the late Professor Hari Jones of the African American Civil War Memorial Museum "By enforcing the Emancipation Proclamation, they freed themselves and their families."

Even more, according to Thomas Morris Chester the only African American Civil War correspondent, the first troops to enter Richmond, Virginia, the then capital of the Confederacy, were African American troops. 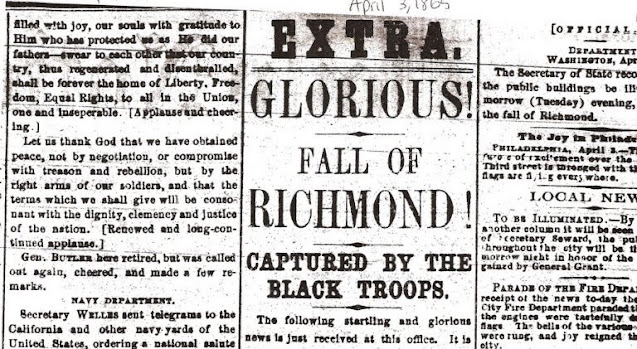 As we move further into the new millennium we will face the true history of our past.  When you are in Washington, D.C. please  visit the African American Civil War Memorial and the museum nearby.
The memorial is called the Spirit of Freedom, and contains 200-thousand plus names of those soldiers who served on the side of the Union in the Civil War.
Descendants come from all over the world to find their ancestor's names, and maybe one day soon so will you!