"What is an International Day?" by Johnny Coleman II

The photo above is of a poster from the International Slavery Museum in Liverpool, England.  August 23rd is an international day and it is observed as the: International Day for the Remembrance of the Slave Trade and its Abolition.

According to the United Nations (UN) an international day is defined:

"...designates specific days, weeks, years and decades as occasions to mark particular events or topics in order to promote, through awareness and action, the objectives of the Organization. Usually, it is one or more Member States that propose these observances and the General Assembly establishes them with a resolution.

On occasion, these celebrations are declared by the specialized agencies of the United Nations, such as UNESCO, UNICEF, FAO, etc., when they concern issues that fall within the scope of their competencies. Some of them may be later adopted by the General Assembly."

"International days are occasions to educate the general public on issues of concern, to mobilize political will and resources to address global problems, and to celebrate and reinforce achievements of humanity. The existence of international days predates the establishment of the United Nations, but the UN has embraced them as a powerful advocacy tool.

Each international day offers many actors the opportunity to organize activities related to the theme of the day. Organizations and offices of the United Nations system, and most importantly, governments, civil society, the public and private sectors, schools, universities and, more generally, citizens, make an international day a springboard for awareness-raising actions."

For a list of all UN International Days please look HERE.

The Trans-Atlantic Slave Trade, which lasted 300 years created historic wealth for the European World with exports from Africa in both people and goods.  This trade also established the United States and the strength of this wealth is still  experienced today.  The discussion of slavery and segregation in the USA has become easier in 2020, however many people choose not to share this history with their children for fear it will ruin their minds.  I am obviously not one of those people.  It think it is important to share what has happened with the youth so it does not happen again.

In 2014, a United Nations resolution established the worldwide observation and this day was observed worldwide for the first time in 2016. Then in 2017 I organized a commemoration of August 23rd in Washington, DC at the African American Civil War Memorial.  The day pays tribute to the people who revolted against the system of slavery on August 23, 1791.  In 1791 the island was known as Santo Domingo until 1804, when it was renamed "Haiti" meaning mountains.  The Haitian Revolution was a dramatic symbol of liberty for African people in the Americas.  Now, when we teach abolition we are often taught dates and times when a government declared, or abolished, chattel slavery.  However, this international day is a date that commemorates self-emancipation (freeing the self) from bondage with dignity.  That is the major difference. 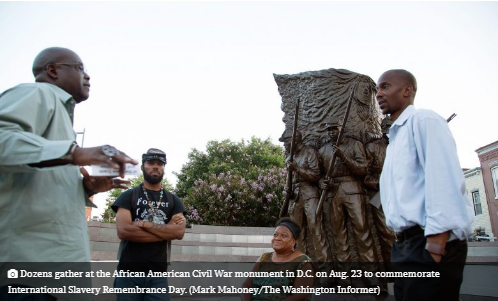 The largest observance of this day is in Trafalgar Square in London, England.  In London they call this "Sankofa Day."  Sankofa (SAHN-koh-fah) translates to "Go back and get it" in the Twi language and is symbolized in the Adinkra as:

(1) a stylized heart shape, or

(2) by a bird with its head turned backwards while its feet face forward carrying a precious egg in its mouth.

These symbols capture the proverb that "It is not wrong to go back for that which you have forgotten."  In the two photos below you will see Shezal Laing, the Director and Founder of the organization Slavery Remembrance.  She is the organizer for the London gathering and her work has  educated the world on this chapter in history.

Finally, when it comes to the commemoration of August 23rd there are annual activities in Liverpool, England starting at the International Slavery Museum (see photo below).

Liverpool is significant because in 1795 it controlled 80% of the British slave trade and another 40% of the entire European slave trade.
The International Slavery Museum in Liverpool opened in 2007 and is a leader in teaching the history of the Trans-Atlantic Slave Trade, its benefits to the European economy and also complex details such as the 'Triangle Trade,' and the 'Middle Passage' and has one of the best curriculum for teaching younger ages about the history of the Slave Trade their Understanding Slavery Initiative.